Another weekend = another trip!

I just got back from Granada, Spain!!! Granada is a town located in Andalusia, Spain which a southern region of the country. I was there for a little over 24 hours which is unfortunately how most of my trips from here on out will be but limited time didn’t stop me from doing and seeing everything that I wanted to in Granda. And let me tell you- it was beautiful.

After class on Friday, we took a Renfe train to Santa Ana which was 2 1/2 hours away and from there, took an hour long bus ride to Granada. The train was so nice that my friends and I walked on and walked off because we thought that our car was first class. To say the least, it was a relaxing, easy and pleasant ride. The bus was so quick that it felt like it almost didn’t even happen- also partially due to my exhaustion.

When we arrived in Granada, it was pitched black and dinnertime. So naturally our first stop was one of the best restaurants in Granada, according to Yelp- Bar Poë. It was a hole in the wall and packed with people. The owner was very friendly and sociable and he spoke perfect English. He served only tapas and drinks. We didn’t know this but in Granada, you order a drink and a tapa comes with it for free!! So this delicious meal was dirt cheap and some of the best tapas I have had yet. 10/10 would recommend. Once we finished eating, we ventured the city and stumbled upon our air b n b and went straight to bed.

The next day, we woke up so early that we beat the sun. We didn’t buy tickets for the Alhambra but we were not about to leave Granada without visiting it. So we did what we had to do and got the tickets. We got to the Alhambra at 7:25 am and the line was already SO long- people had tents and had clearly camped out to ensure that they would get tickets. We stood in line, in the dark, in the cold and waited and waited but it was totally worth it because a little over an hour later, we all had tickets!!! The first people in line were so incredibly excited when they got their tickets that you would’ve thought they won a golden ticket to get into Charlie’s Chocolate Factory. But I can’t blame them- they did sleep outside to get that ticket and I was just as excited when we got our tickets. But at that time, the sun was still not completely shining, it was still cold and the Alhambra wasn’t open yet. So to pass the time, we decided to eat- naturally.

We ended up at Fútbol Cafe, which felt similar to Cafe Du Monde back in New Orleans. Instead of beignets, they specialize in churros and chocolate so you know I wasn’t complaining 🙂 We all ordered so much food and left feeling so content, full and warm.

On our way back to the Alhambra, we decided to walk through the Moorish neighborhood  -Albayzín. It was beautiful. We then journeyed back to the Alhambra and saw as much as of it as we could possibly see. It felt like a maze and it was also HUGE. You could easily spend a full week in there and still not have seen everything. But I feel like we saw a lot and learned a lot in the amount of time that we were there. We also took part in a little Moroccan photoshoot, which was ridiculous and hilarious- something I will never forget.

For those of you who have never heard of the Alhambra (cough cough- mom and dad and I am sure many more), it is an Arabic fortress and castle that housed the Moorish rulers until Isabel and Fernando conquered Granada. If you are at all interested, I highly recommend reading about it- google it! 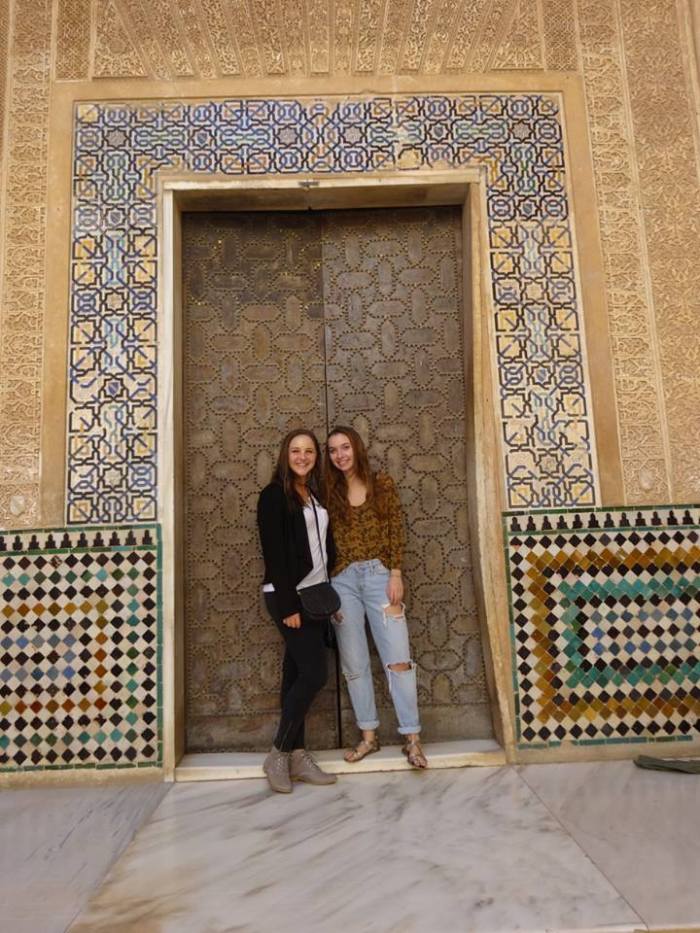 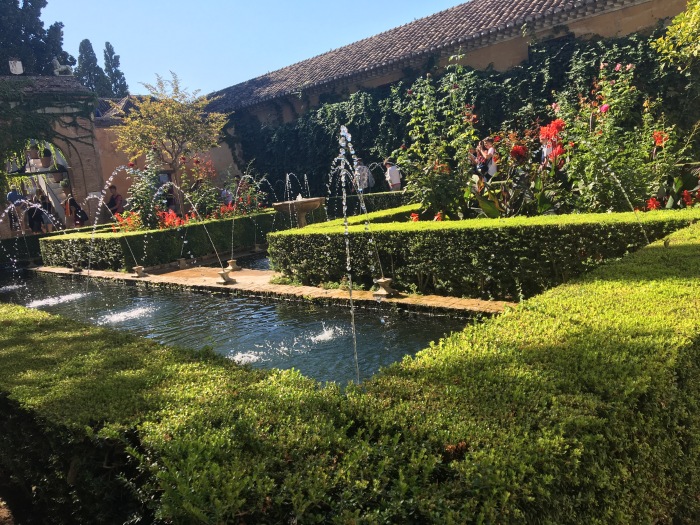 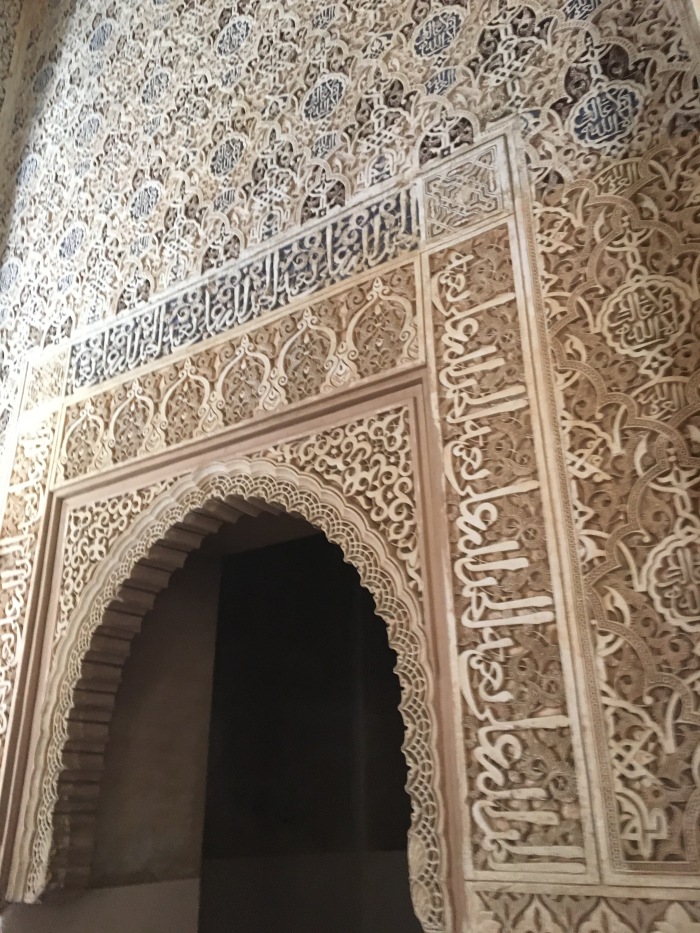 We worked up an appetite after spending many hours wondering ande exploring the Alhambra. We went into the center of the city and found an amazing mediterranean restaurant. And I kid you not- it was the best mediterranean food I have ever had. We had chicken kabobs, hummus, tzatziki sauce, baba ganoush, Israeli salad, and so much more! My mouth is watering just thinking about it!

Once we were full and happy, we wondered the streets of Granada that were full of vendors in their booths- it was a mercado of sorts but it felt like we were in Morocco because of all of the Moorish influence that still exists in Granda today. People were selling tapestries, purses, lamps, clothes, spices, and SO much tea. 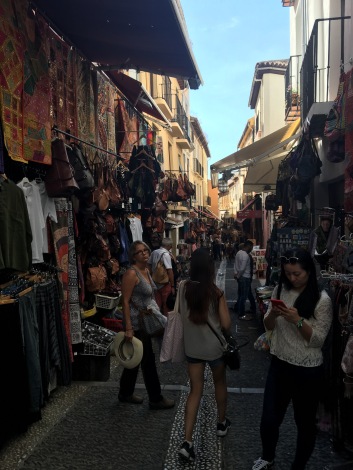 After such a full day, we felt like we earned a nap. So we took a little siesta and then woke up and went back out exploring. We went tapas-ing and bounce from restaurant to restaurant ordering a drink and eating our free tapa while looking at the Alhambra lit up against the night sky. It was a pretty cool experience. Once we were full, we felt the need to do as the locals do and smoke hookah in a tetaría. Tea is one of my favorite things (second to chocolate) and so I ordered “mil flores” tea. I asked the waitress what it was like and she responded by saying there are a lot of flowers in it… a very literal response but I was sold. I loved every sip of it! 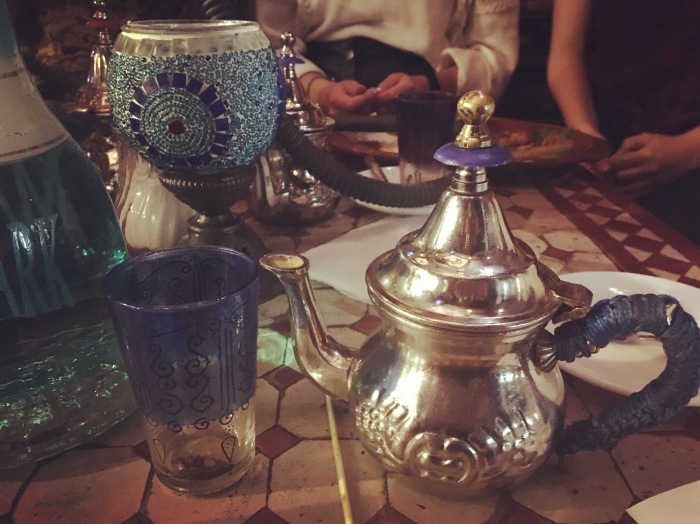 To finish off our time in Granada, I made a reservation for my friends and I at the Arabian baths. We got to spend an hour and a half in the baths and also had a 15 minute massage. I was in absolute heaven. They offered complimentary tea here too! It was the most relaxing and needed thing that we could’ve done for ourselves after all the traveling we have done and what we have put our bodies through. They advertised it as swimming in history which is exactly what it felt like. I think they were the original baths that were used 100s of years ago. The architecture and details were stunning. My favorite part was the massage- of course. I have been missing my reflexology outings with the fam back in Houston so this was as close as I could get to having a little piece of home. They rubbed my back for the full 15 minutes and lathered me in lavender oil. My back has been killing me because of how much I walk every day and I don’t really know why else- but it has. So this was absolutely perfect and then I was told to lay on a giant hot rock until I was ready to go back to the baths. I laid there for so long my friends thought that I was kicked out. I would do anything to do this again. I found out that there is another location here in Madrid so I will definitely be exploring that after midterms. All in all, Granada was amazing: quaint, friendly, homey town and I hope that I am lucky enough to return one day. 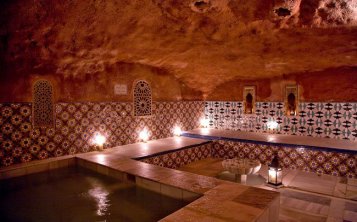 These aren’t my photos just wanted to show you what I was attempting to describe.

I love traveling within Spain. It is so much easier- no airport, no planes, I have cell service and data. And I want to finish this semester and be able to say I have seen a lot of Europe but more importantly, Spain. This is a once in a lifetime opportunity and I am doing my best to take full advantage of it!

P.S. I apologize if this isn’t my best post. I am currently writing it from my bed because I have a double ear infection.

Sidetone: I noticed that I keep blogging about my trips and adventures outside of Madrid and wanted to say that I am going to change this. I love Madrid more and more every time I leave it. It makes me appreciate this new place I am calling home more. Unfortunately, I have been spending the week days recovering, relaxing and doing school things. It’s time for me to push through my exhaustion and explore this city more because there is so much to see and to do- I got to do it. Writing this down holds me accountable. So be on the lookout for a blog post starring Madrid soon.

Goran's layout adjusts itself depending on the device you are using. This means your site will look good not only on laptop browsers, but also on devices with smaller screens, such as the iPad and the iPhone.